Horror for the Discerning Fan

On Carmilla, The Iconic Vampire You Should Know About

I love vampires. I think they might be my absolute favorite monsters. As far as monsters go, vampires are especially threatening because they can move amongst humans undetected. They are often beautiful, cunning, and charming, all the while masking a barely restrained brutality. Sometimes the vampire is full of self-loathing and struggles with the moral and existential repercussions of her bloodlust. Other times, the vampire fully embraces her power and relishes each victim.

Vampires are both a physical and spiritual threat, poised to cause you bodily harm as well as psychological. A vampire might “hurt” your body, but the horror lies in realizing that you might like it. You might succumb to the vampire, being complicit not just in your own death but also in your eternal damnation.

And as far as vampires go, almost everyone has heard of Dracula.

He is an iconic and enduring example of the vampire, perhaps the single most influential vampire in Western literature. And with good reason—Bram Stoker’s Dracula is an excellent horror novel that operates on multiple levels. For one, it’s a solid man vs. monster story, with plenty of danger and adventure. On a deeper level, it can be read as a crystallization of certain attitudes of the Victorian age, especially regarding how the female characters are portrayed, as well as Dracula’s characterization. Particularly in the 19th century, vampires were the embodiment of unchecked sexuality, and this horror classic is rife with concern for the dangers of sex.

But what you may not know is that Dracula was strongly influenced by another, much less famous work, Carmilla.

Carmilla is a novella written by Joseph Sheridan Le Fanu and published in 1872. It tells the tale of a young woman, Laura, who lives with her widowed father in the fictional county of Styria. It’s a lonely but serene life in the beautiful countryside. The scenery is wild and the village is barely resisting the encroaching forest, but Laura, her father, and their servants lived a charmed life in the rough but picturesque country. Everything is routine, measured, and under control; that is, until a series of strange occurrences leave Laura and her father to host the lovely and enigmatic Carmilla at their home. It’s not long before Laura and Carmilla become inseparable, as both girls are fascinated with each other and Carmilla, in particular, is oddly passionate towards and possessive of her female companion. A mysterious illness strikes Laura just as she begins having strange nightmares of a large black cat sneaking into her room at night to bite her chest.

Don’t mind me, I’m just going to drink your blood is all.

Of course you’ve guessed that Carmilla is, in fact, a vampire. The last part of the novella is a race to protect Laura, separate her from her attacker, and destroy Carmilla. Of course, the vampire is killed and the young women of the Styria are safe once again.

Carmilla has had a large cultural impact, though not as big as the impact of Dracula. The character Carmilla is the prototypical lesbian vampire, creating a subgenre unto itself, spawning film adaptations, plays, graphic novels, and inspiring thousands. Many people, more knowledgeable than myself, have studied and interpreted this novella, exploring the story through many lenses, including but not limited to feminist theory, British Colonialism, and psychoanalysis. (My thoughts are not so grand or expansive–I endeavor to focus on a small component of the story. I could write much, much more on Carmilla.)

Even a superficial reading of both Carmilla and Dracula demonstrates that they share a lot of similarities, such as the far-flung and exotic (to the British) Eastern-European locale; ruinous but beautiful castles; a dark and seductive aristocratic villain who doggedly pursues innocent blood; capable and masculine men who pursue and defeat the monster; virginal and naïve female characters who struggle to protect their purity; and other female characters who fail to protect their purity and pay the ultimate price.

But they are also very different stories with different vampires. The thing that struck me most was how the vampires stalk their respective prey. While Count Dracula uses force and power to get what he wants, Carmilla exploits social conventions and gender roles to her own ends.

Dracula is larger than life. He can control the weather, scale walls, shape-shift into bats or dogs, control animals and people with his mind, and teleport. He is insanely clever. On top of all that, he possesses superhuman strength and is nearly impossible to kill. It takes five grown men to subdue Dracula and finally kill him, and only after a lengthy chase from London back to Transylvania. Additionally, Dracula is rich. His wealth affords him access to lawyers to secure important and advantageous real estate transactions. He buys the loyalty of gypsies and anyone else he needs. He has noble status, which means he has socially recognized power, lending him yet more influence.

In this way, Dracula’s strength, wealth, and social status represent a sort of perversion of a successful Victorian man. Dracula is physically strong, intelligent, wealthy, and hails from a long line of powerful aristocrats (none of this “buying titles”! The horror!), but he uses these things to corrupt and spread evil, attacking the strict Victorian moral code.

But Carmilla, in my opinion, is a much more insidious predator. She exploits cultural expectations of hospitality and the stiff rituals of manners to get what she wants, oftentimes feigning illness and playing up her “delicate” nature. Everything about Carmilla is carefully calibrated to reinforce the idea that she is helpless and unthreatening.

She is introduced to her victims via her mother, probably a vampire as well, who always has some pressing, life-threatening business to handle. Because of a recent, mysterious illness, the mother is unable to take Carmilla with her on her journey, and she beseeches the victim’s father to take charge of Carmilla until she returns. Carmilla’s mother is beautiful and of high and distinguished rank—the men are both eager to provide assistance and loathe to refuse, as it would be rude. And at the risk of insulting Carmilla and Carmilla’s mother, the men respect her mother’s directions to never ask about Carmilla’s past or her family’s history.

Carmilla’s habits are very strange—everyday she wakes at one o’clock in the afternoon, hardly eats anything, experiences erratic mood swings, and even disappears all together at one point. But her health is always an excuse. People are constantly commenting on how she is in “delicate health” and is a very “nervous” girl. Laura and Carmilla routinely go for walks and Carmilla is always “immediately exhausted” by these outings.

And perhaps most important, Carmilla is a gorgeous girl, to the point that it debilitates the common sense of those around her. There are multiple instances throughout the book where a character second-guesses a decision regarding Carmilla, but then reflects on her beauty, and then immediately dismisses his doubts.

An example involves General Spielsdorf, another Englishman in the area who lost his daughter to Carmilla. Carmilla’s mother approached him as well, asking that he host her sickly daughter while she attended to vital business. For a split-second, General Spielsdorf wonders if that was a good idea. But then:

“‘[Carmilla] sighed, and looked in my face. She was so beautiful that I relented. I was sorry I had for a moment repented of my hospitality, and I determined to make her amends for the unavowed churlishness of my reception.’”

“Yeah, I’ll totally rethink letting you stay with us…”

Men are powerless  around her. Her beauty and delicateness is so effective at underscoring their notions about what Carmilla should be that they never bother to consider what Carmilla actually is.

That is, until they learn the truth and then violently defeat her.

Her beauty also helps her seduce victims, especially innocent and naïve Laura. Carmilla becomes so close to Laura that it’s difficult for Laura to think that Carmilla might be something other than a sweet, weak girl, even in the face of mounting evidence to suggest there is something very wrong with Carmilla. Laura even discounts her own instincts regarding her new friend:

“Now the truth is, I felt rather unaccountably towards the beautiful stranger.  I did feel, as she said, ‘drawn towards her’, but there was also something of repulsion.  In this ambiguous feeling, however, the sense of attraction immensely prevailed.  She interested and won me; she was so beautiful and so indescribably engaging.”

Carmilla is kind of a perversion of the Victorian ideal woman–beautiful, endearing, polite, unobtrusive, and utterly dependent on those around her, in more ways than one. She’s so agreeable. She is a very sweet girl, the sweetest, because that’s what everyone around her wants to see. They’re too busy buying into this myth about who she is, they don’t ever see her for what she is–a shrewd, calculating monster. 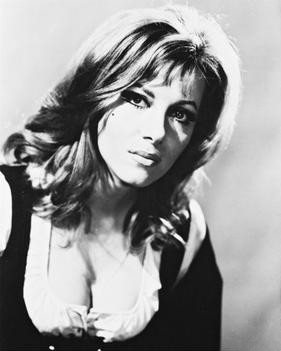 Did I mention that Carmilla is totes hot?

I’m pretty sure Dracula could not get away with this. While Dracula may be more physically powerful than Carmilla, she manipulates gender expectations and is, in my mind, a more effective vampire.

Both of these vampires illustrate the way that this particular monster seeks out human weakness. Where Dracula seeks to overpower, either by money, influence, or brute strength, Carmilla identifies and abuses the flaws of the social structure. In keeping with much vampire lore, both Dracula and Carmilla are astute observers of human behavior and society and seek to use those systems to their advantage.

Personally, I think Carmilla is the more frightening vampire in many ways. I’m not saying Dracula isn’t terrifying, because it’s very hard to win against him, and if you lose, you’ve lost everything. Dracula is an example of how the powerful in society can move unabated. Carmilla, on the other hand, is an example of how someone who has no “power” can still do great physical and spiritual harm, maneuvering in such a way that you don’t realize the danger until it’s too late.

I guess I think about it in terms of being a character in the story, rather than simply a reader. If I found myself facing Dracula, I’d probably know about it way in advance. I could gather my crucifix and garlic and holy water and prepare myself for a fight. Honestly, I’d probably lose, but at least I could try to defend myself.

But with Carmilla, I wouldn’t even be able to do that. She would fly under my radar, dazzling me, seducing me. By the time I realized what was happening, she’d have me in her grasp. I’d probably have one foot in the grave already, or die without ever knowing what had happened, the same way General Spielsdorf’s daughter died.

It’s a stark reminder of everyday life, where we make assumptions about the people around us, comfortable in our belief that they could never and would never harm us. Sometimes we don’t learn the truth until it’s too late. We should remember not to underestimate the people around us, especially when we might be blinded by our own expectations.

More from my site

This site uses Akismet to reduce spam. Learn how your comment data is processed.

I feel like I deserve a little reading break after

What scary books are y’all reading/planning to r

Who saw this movie! I’m digging it so far! I’m

This October, I’m revisiting several of my favor

Theme by Anders Noren — Up ↑